Let me please introduce you to the Terra Cielo Mare Orienteering El Alamein ! The first thing to note about this timepiece is its name; forget about the TCM acronym and move back to the very origins, think about the name that links this brand to its Italian roots, Terra ( Earth ), Cielo ( Sky ) and Mare ( Sea .) Undoubtly this is a strong sign of courage and coherence that remarks the Italian origins of a timepiece and it comes in a particular time of our lives when manufacturers tend to shorten names up so that they fit an international communication logic.

This name change affects me too, because only the name “ Terra Cielo Mare ” has been appearing in the brands menu for the last few days. The adventure that has brought this Italian brand back to life is curiously connected to the fortune and, somehow, the evolution of this very magazine. The newly acquired brand had just been resuscitated more than a couple of years ago, it was April time when, almost as a joke, my memory went back to that Italian manufacturer that I had gotten to know inside a historic boutique in Naples called Zilberstein – now gone – when I still used to live in that city. 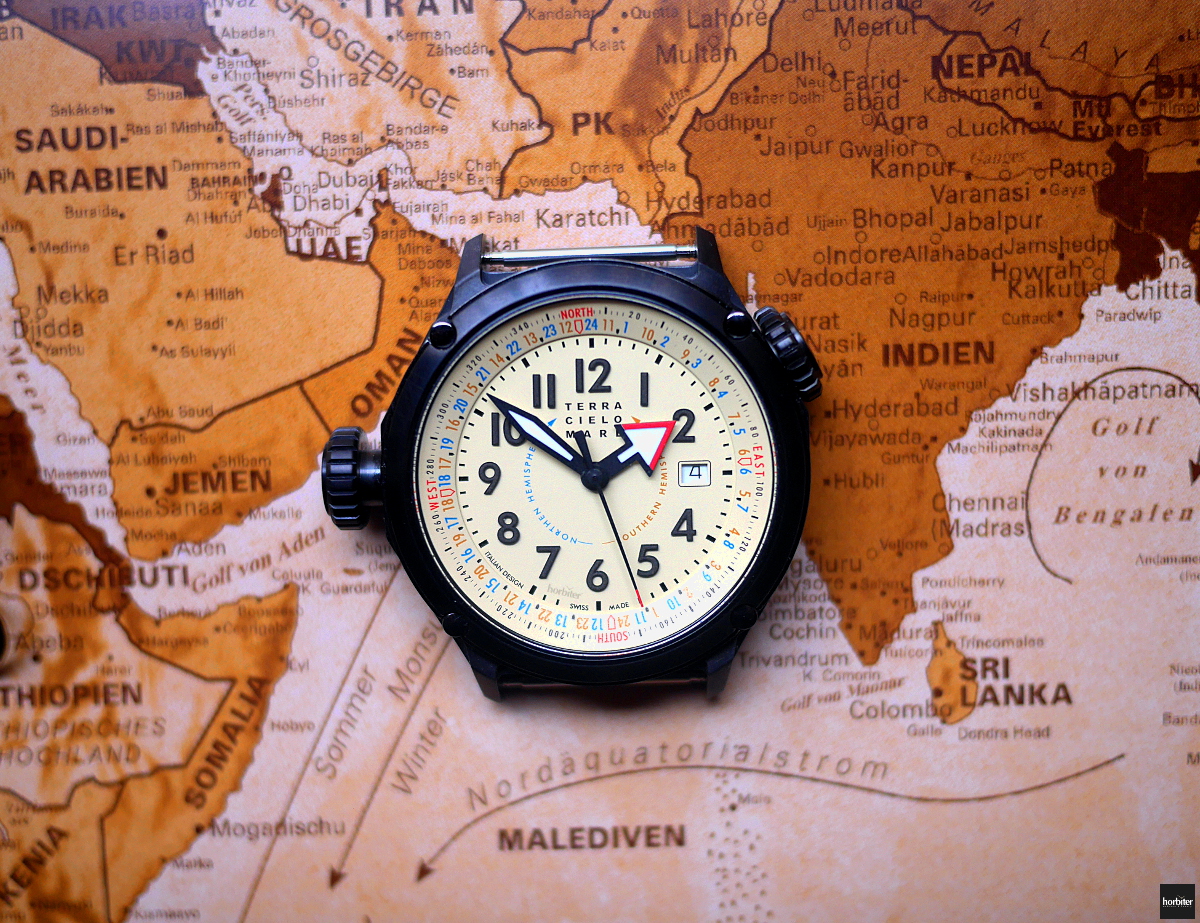 Six articles after the first news release about the Tazzoli Marines AES and here we are with the first 2016 article about the Terra Cielo Mare Orienteering El Alamein , a numbered series dedicated to the historic battle fought in North-Africa in 1942, the aesthetic representation of a timepiece that has become a “ hero ” of this brand in a matter of months. When the Orienteering was born in 2010, its originality lied in the simplicity of its function, actually in the most original function that one can achieve when crafting a three-hands-watch; the sun compass . 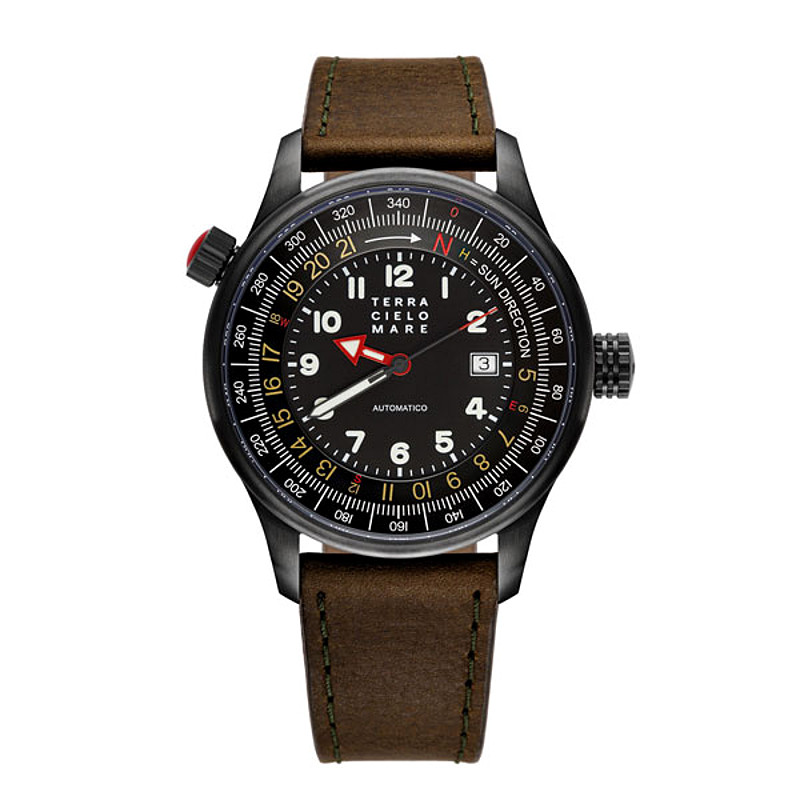 The manufacturer has gone back to that innovative idea and has further developed it by creating the new Orienteering , timewise, the Terra Cielo Mare Orienteering El Alamein is the second version of this particular timepiece. The original case appeared a bit trivial-looking at first sight, it had been produced by the former management of the brand and has now been replaced by a titanium – made case that sports the most-outstanding feature of the best (and fast selling) piece of the brand: the Tazzoli ‘s crown located at 2 o’clock. 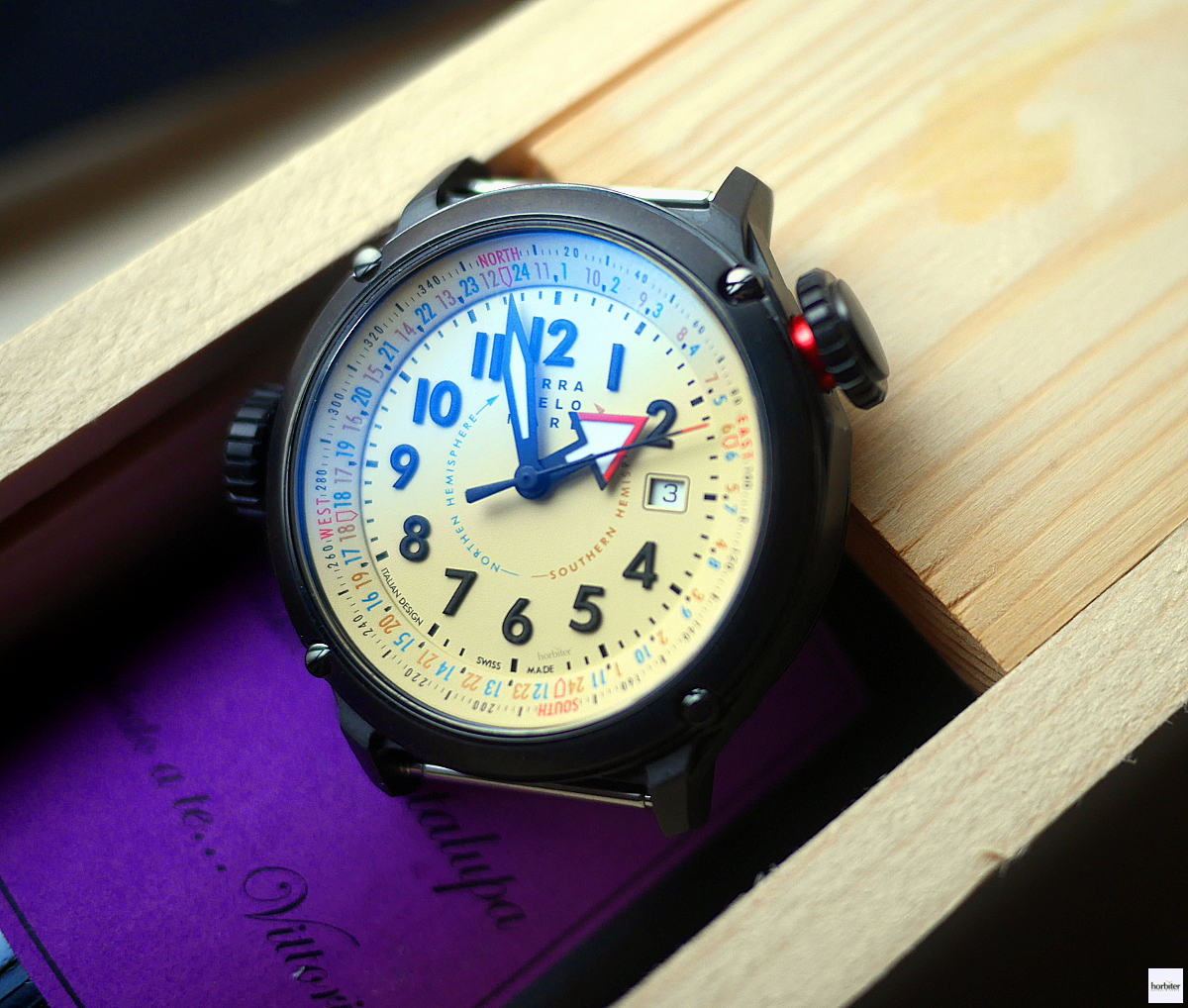 It doesn’t really matter what the function of the crown on either the Tazzoli or the Ferrarin is, the only important thing is that its location at 2 o’clock is one of Terra Cielo Mare ‘s trademarks. 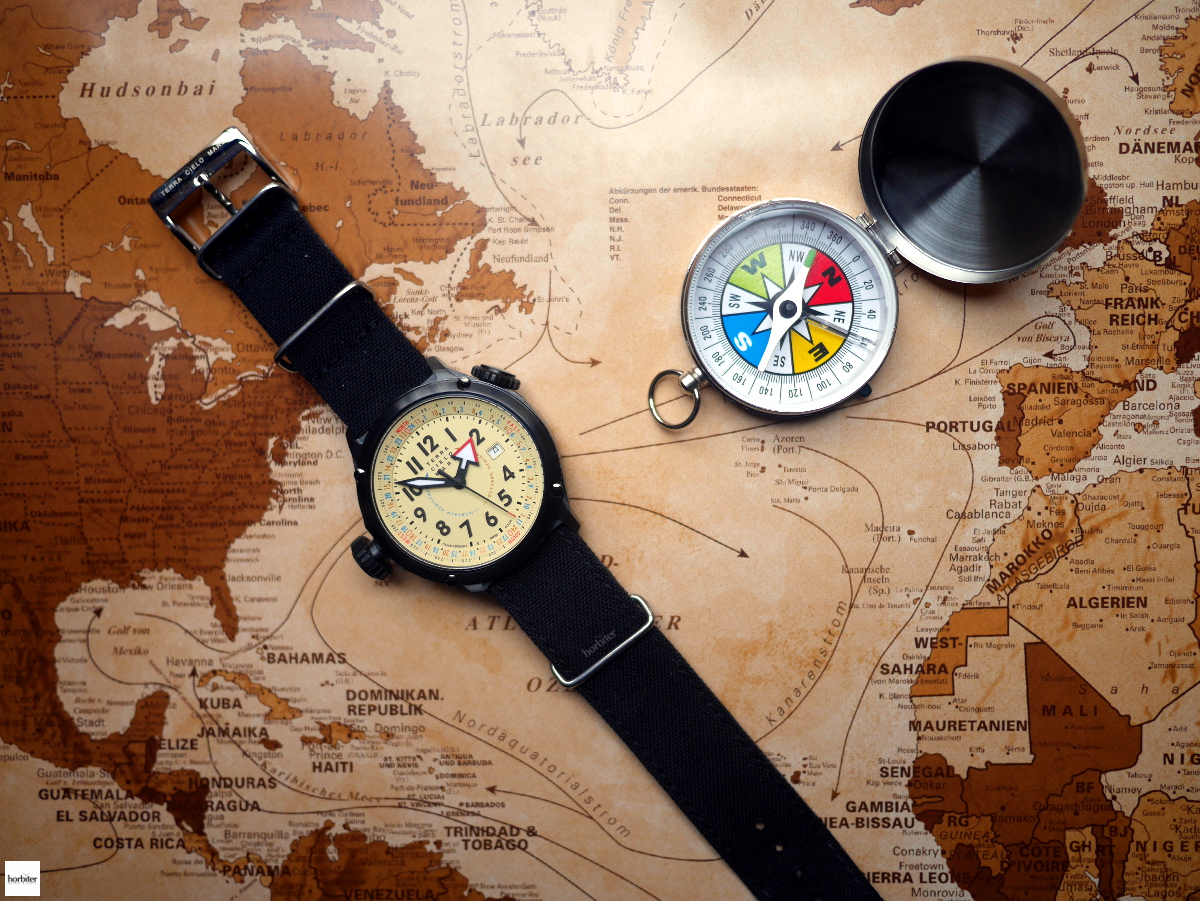 The lugs and the case middle are the logic fusion between a Sorci Verdi chrono (take a look at the small step…) and a Tazzoli . When you see that small step under the crown, you will immediately “ feel ” that the Orienteering is a Terra Cielo Mare timepiece. The titanium – PVD – treated case seems quite a complex one, it is built up of different parts that are kept together using four feedthrough screws, the ochre-colour dial features quite a bright pantone while the black Arabic numbers have been applied on contrast. On the outer ring is a rotating disc that is used to activate the sun compass; after pairing the hour with the sun, you can then adjust it on the hour counter and you will eventually be able to locate the position of the four cardinal points in less than a minute. 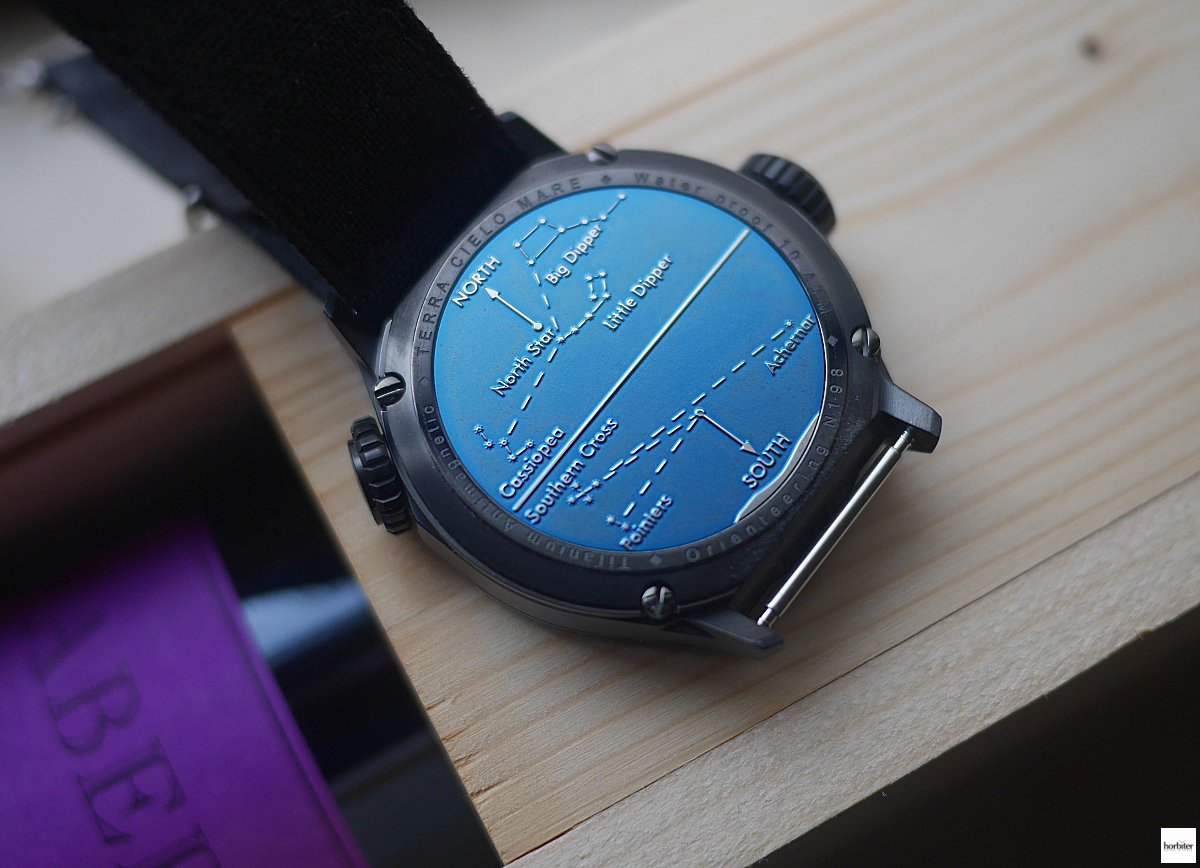 If you are one of those night explorers, Terra Cielo Mare have the perfect solution for you too. By applying a specific process to the case back, the manufacturer has created a special blue background where you can spot the North Star in the northern hemisphere and the Southern Cross in the southern hemisphere that will help you to find your way even at night. 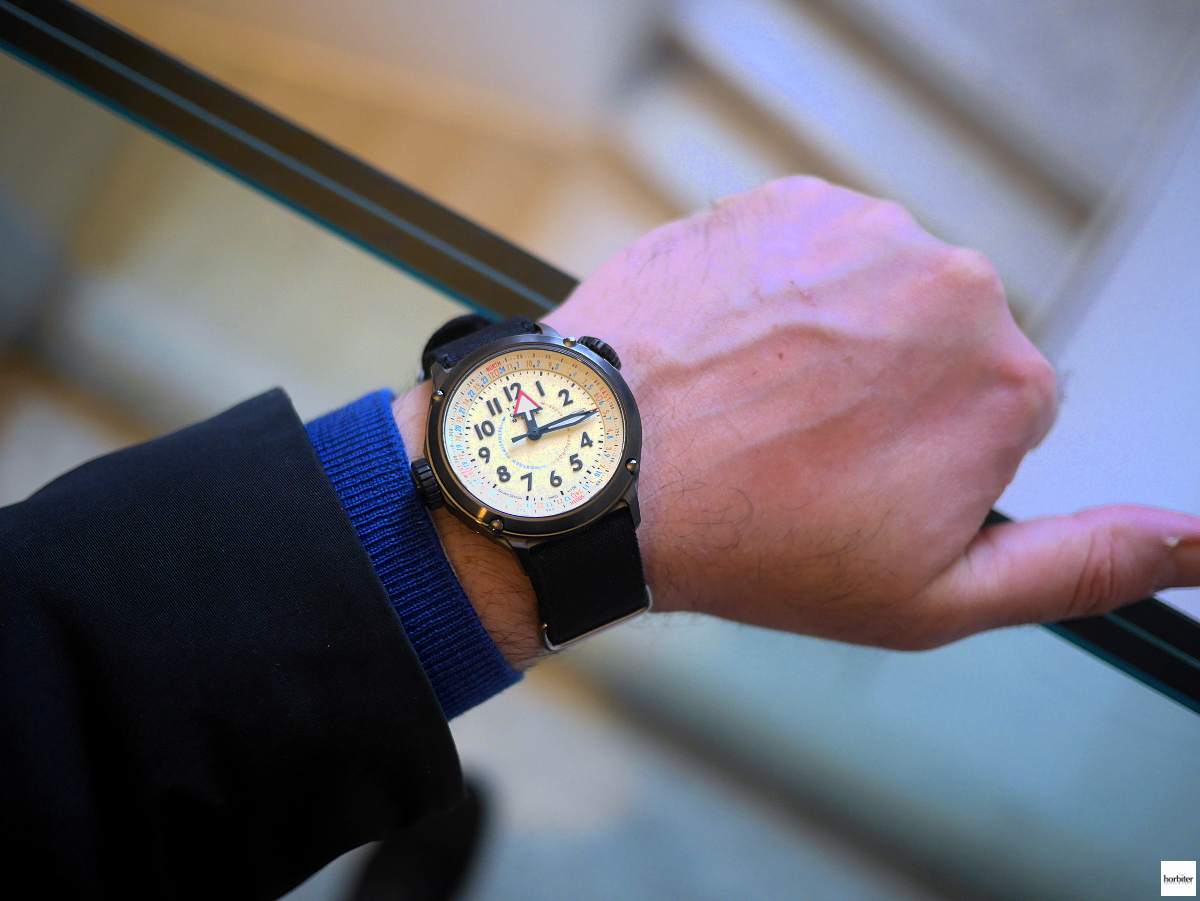 The graduated disc embellishes the dial by wisely filling the void existing between the flat glass and the central part. This creative solution represents one of those stylish obstacles that many watch replica brands never know how to overcome; you have a ring that shouldn’t be there, it is an empty space that nobody has placed there intentionally and no designer is ever able to fill it. 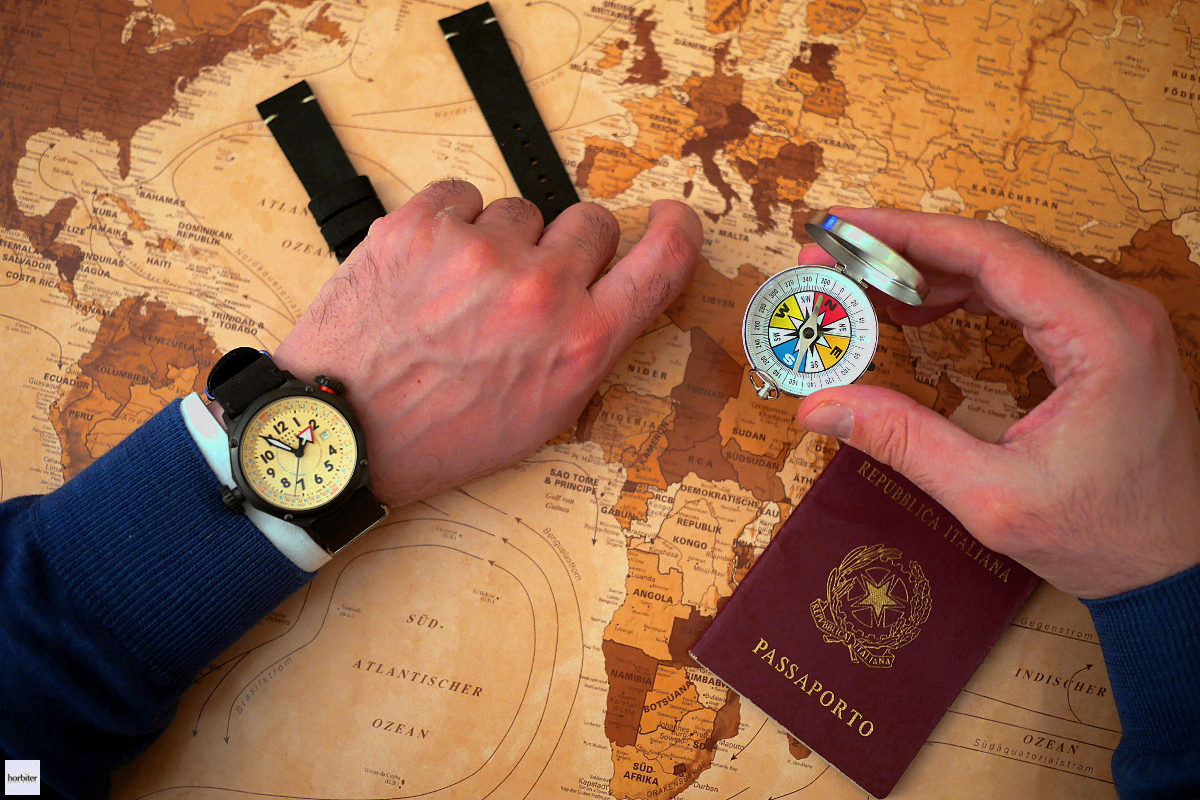 The insertion of a curved ring that is at least 5mm wide creates some sort of continuity between the glass and the dial and it makes this timepiece almost look like a sporty worldtimer. I were curious to see how the dial looked like if the size of the Arabic numbers located on the cardinal points were to be increased while the size of all the remaining ones were to be left untouched (or the other way round), an experiment that was already carried out on the Sorci Verdi watch replica . Personally, I would get rid of the date at 3 o’clock alltogether, but I understand that I am one of those people that think that a timepiece should remind me of the time only and that the presence of the date on a dial somehow ruins the balance of a watch replica by providing me with something that I should already know by heart. 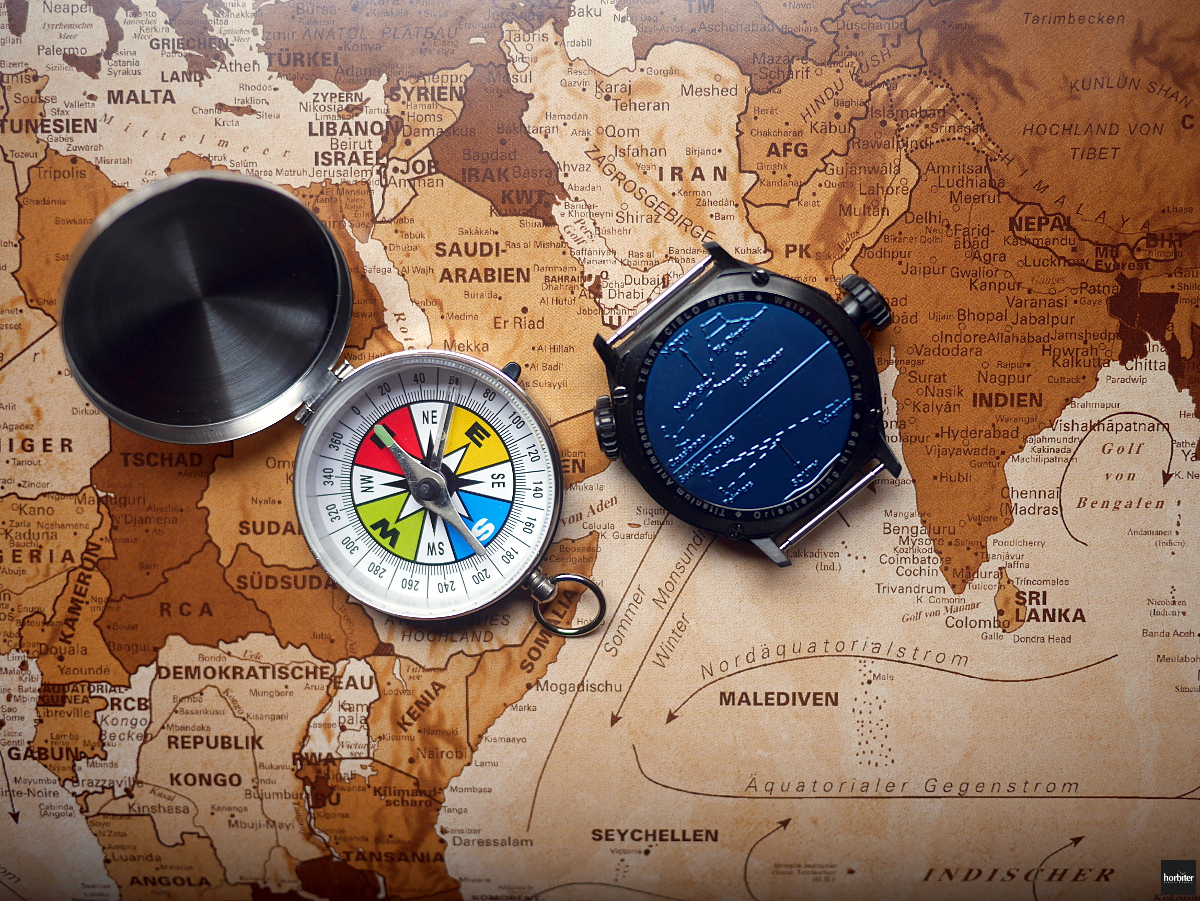 The Terra Cielo Mare Orienteering El Alamein brings with it a new original analogic function that clashes with the the booming of smartwatches and their digital functions. It is some sort of a challenge that is based on simplicity and usability under every condition, the small Italian manufacturer is trying to conquer its own position focussing on continuity and, with the launch of its Orienteering , it is also trying to fill a specific niche-market, that of people who want a custom-made timepiece crafted by a small artesanal boutique.There are two different versions of this watch replica , one sports a classic rolled leather strap with a pin buckle while the other version sports a NATO strap (priced at 2450 €) that is extremely comfortable to wear and it perfectly fits the design of the El Alamein , in particular if you are a mountaineer like Luca Schiera , the brand ambassador who is currently wearing this timepiece while in Ethiopia . I have a few questions bugging me: what if that very same NATO strap featured the same two coloured “ moustache ” of the leather strap? What if it also featured a similar buckle? And last but not leats, what if this timepiece’s name were exclusively in Italian in the future? 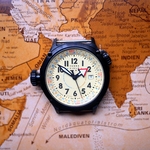 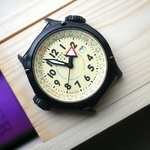 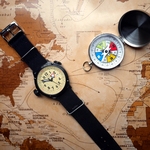 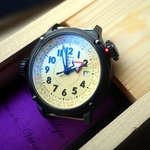 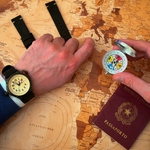 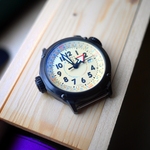 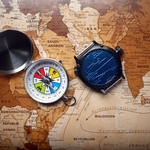 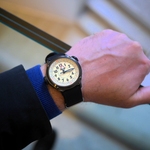