The halls were abuzz with news from Seiko at Baselworld 2016. The first ever Seiko Credor Tourbillon wristwatch from this much loved, ultra conservative watchmaker from Japan. The first impressions was one of moderate surprise. No, we lie. We were shocked! Then we had our hands-on session, where we spent considerable time examining, photographing the Credor Fugaku Tourbillon and even more time talking and quizzing the fake Seiko PR folks. And finally we came away with rather mixed feelings. On the one hand, this was a beautiful movement. Hand wound, magnificent in almost every way. The tourbillon is proudly displayed. Very elegant. But the ultra conservative nature of the Seiko company was broken by the use of graphical motifs and audacity of the sapphire encrusted bezel. We had expected a watch which was more understated. More in line with the superlative Eichis or the Grand Seikos. So we gnash our teeth, and rend our garments in remourse. And lament.

We are being over-dramatic, and over react. Indeed, but we feel perhaps not out of line. Not when it is a given that the Seiko company holds our very high esteem, deep respect and great love.

Seiko filed a patent for the tourbillon way back in 2000. But until Baselworld 2016, neither Seiko nor any of its subsidiaries have ever made a wristwatch with a tourbillon. Why? As we understand it, the demand for tourbillons is very popular in many horologically important countries, but for some reason, is not particularly highly sought after by Japanese collectors. We can only speculate on why the long incubation period. But looking at this article might also yield an answer. We saw and had our hands-on in Baselworld which was in March this year…and have had to allow time to let the impressions and discussions percolate to be able to publish this review. And yet, this is not our usual structured, detailed review. This is more one where our thoughts and feelings (yes, some of those feelings are rather strong) have had the time to incubate, and take shape.

But on to the formal review. The edition size of this Limited Edition is extremely small. Only 8 are planned to be ever made. And the incorporation of the diverse skills of three of Seiko’s most experienced craftsmen, all of whom have been recognized as Contemporary Master Craftsmen by the government of Japan. 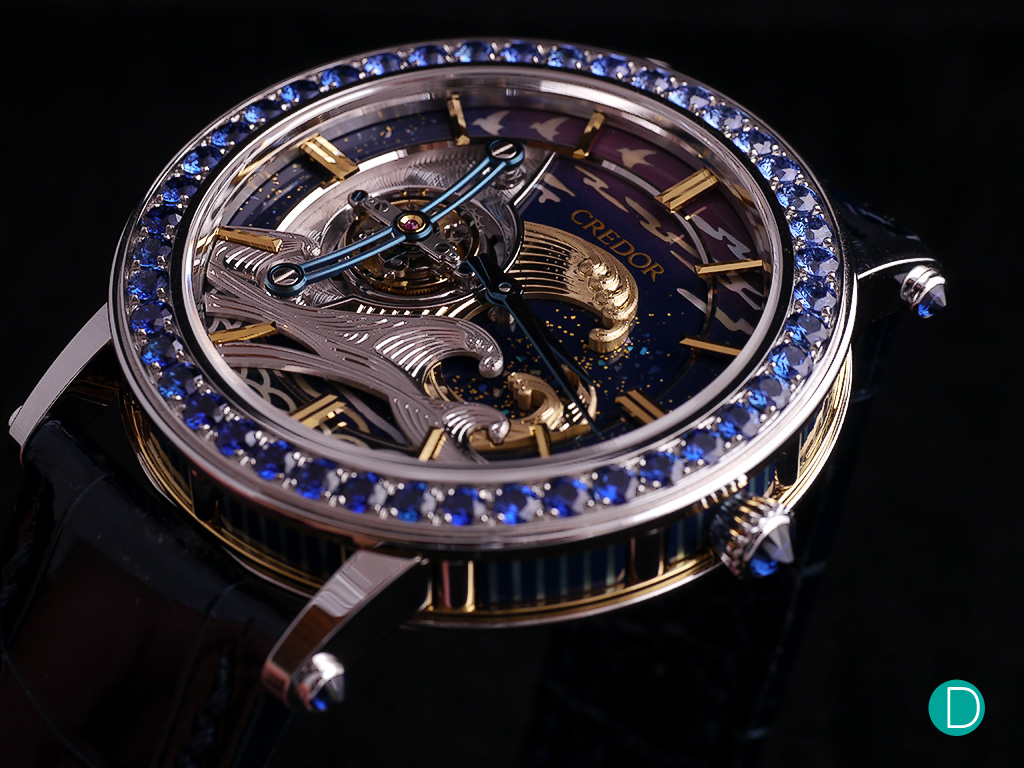 The case is in platinum, 18k yellow gold and 18k white gold in a combination. While we are not usually fans of bicolour or tricolour cases, the use in the Credor Fugaku is rather restrained and quite tasteful.

Platinum is a replica metal Seiko and Credor reserves for their masterpieces. The Eichi and Eichi II were in platinum. As were the Credor Minute Repeater and Sonnerie. As is our all time favourite Seiko…the fake Grand Seiko Spring Drive 8 Day Power Reserve.  The Fugaku, on the other hand, is by Seiko Instruments based in Morioka. It is thus based on the more traditional mechanical movement with a regular balance wheel which is made in Morioka. Note also that the 2000 patent was also filed by Seiko Instruments, and we believe the Fugaku is a derivative of the principles outlined in the patent.

Like many Japanese companies, the Seiko Corporation encourages internal competition within its own divisions. Teams regularly compete with each other, often developing into two distinct and separate strains from the same corporate DNA. This phenomena is seen within the Japanese corporations as diverse as Lexus and Honda. So it is with the teams at Shiojiri and Morioka. The Shiojiri team has the Micro Artist Studio for advanced hand work. And the Morioka team has the Shizukuishi Studios.

The engraving works are done by Kiyoshi Terui, the master engraver who works by hand using tools he made himself. The overall design, including the integration of the tourbillon, metal engraving and lacquer work, was entrusted to Nobuhiro Kosugi, the first watch designer to be selected as a Master Craftsman by the Japanese Government (2014). For the dial lacquer work, Seiko enlisted urushi expert Isshu Tamura, who honed his skills in the Kaga Lacquer Work traditions of Kanazawa. Tamura has executed his technique in Kaga lacquer work not only in lacquer ware, but also in the creation of luxury fountain pens and wristwatches which have received worldwide acclaim for their elaborate detail and fine beauty.

This combination, a dream team of sorts, culminates in an expression of Japanese beauty. The detailing is exquisite. The workmanship true virtuoso. 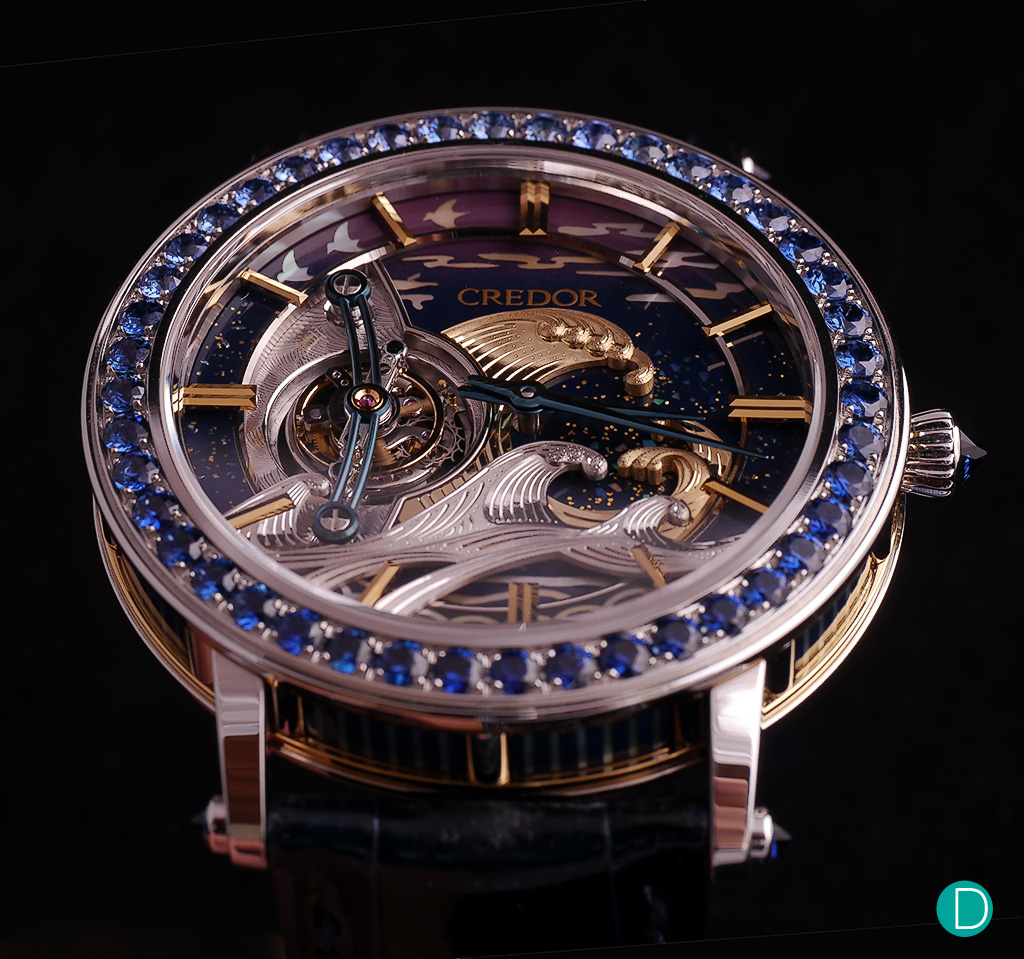 The motif on the dial and on the case back is inspired by the celebrated Katsushika Hokusai’s series ‘Thirty-six Views of Mount Fuji’. The Thirty-six Views is a series of landscape prints made by Hokusai (1760–1849). The series depicts Mount Fuji from different locations and in various seasons and weather conditions. The original thirty-six prints were so popular that Hokusai later expanded the series by ten. The print depicted on the Fugaku is often listed as the first of the original thirty-six: The Great Wave off Kanagawa. Hokusai made the prints using a method called ukiyo-e, a genre of Japanese woodblock prints (or woodcuts) and paintings, principally produced between the 17th and the 20th centuries and featuring motifs of landscapes, tales from history, the Kabuki theater, and pleasure quarters.

The scene depicted by Hokusai’s prints were re-recreated with extreme delicacy on the dial by engraving. Kiyoshi Terui worked to the limits of his technical skill in engraving to breathe three-dimensional life into the wave that dominates the scene depicted on the dial. The 18k yellow and white gold wave is 1.6mm at its thickest and 0.5mm at its thinnest, a true marvel of manual craftsmanship.

The case back features the same wave, combining engraving and lacquer finishing to create a modern stylised version of the theme. The tourbillon bridge is the outline shape of Mt. Fuji, central to Hokusai’s work and to the world’s view of Japan today. The watch’s name, Fugaku, which is one of the ways in which the Japanese language describes Mt. Fuji.

The dial also sports the unique colours born out of the combination of engraving and lacquer. The laquered parts giving life and a 3 dimensional prominence to the engraving works. The scene behind the dial evokes a sky at dawn, with a lush gradient of navy blue to purple brought to life through the colored lacquer. The extremely advanced techniques required in the creation of the color gradient are the product of hours of painstaking effort by lacquer artist Isshu Tamura. To express these delicacy, the most precise of hues in a lacquer that is just 0.1mm thick are used. The Credor emblem on the dial is also handcrafted by Tamura in gold lacquer, or Maki-e.

Fine mother-of-pearl work adorns the traditional Japanese Seigaiha (waves in a blue ocean) patterning on the 6 o’clock and the clouds and plovers on the 12 o’clock of the dial, as an expression of the richness of Japanese natural scenery.

The hands are hand blued Dauphine styled hands and the hour markers in faceted, polished appliqués in 18k yellow gold. 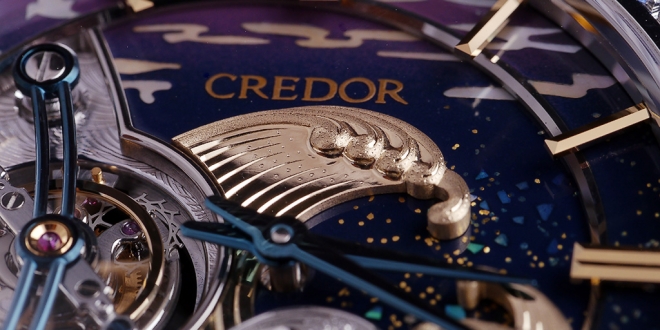 The bad and the ugly

There is no criticism possible on the motif chosen. The Hokusai is both a traditional and a classical theme which is well loved not only in Japan but the world over. The techniques used in its execution are by world class artisans executing their art at the highest levels. Superb virtuoso is exhibited.

However, as eluded in the opening paragraph, we came away not totally enthused by the Credor Fugaku Tourbillon. We cannot put this down to even the use of an image on the dial. As truth be told, we (as in the Chief Editor) are not fans of images on dials, however beautiful or well executed. The dial is to serve a purpose to allow the watch to tell the time and its indications in a clear, legible way. We prefer not to embellish it with non-essential decorative elements like images. By inference, we are not fans of enamel dials depicting scenes as well, although we are extremely excited by grand feu dials purpose made to for the sole purpose to tell the time and complication indications.

What offends our admittedly very sensitive perceptions is the use of blue sapphire. Huge ones. A total of 48, weighing in at a whopping 3.22 carats embellish the bezel, the crown, the case sides and the lugs. We think it too garish. An adornment which is totally unnecessary and takes away from the grandeur of the tourbillon. We almost could not believe this is a Credor we were looking at, and not a creation from Jacob & Co. The style suits Jacob & Co’s flamboyant character, and we would find it acceptable, even beautiful there. But on a Seiko, our perceptions and respect is for the traditional and very conservative image. And what we got is a decidedly unpleasant after taste due to the contrary. Perhaps it is still in character with Japan. A country renowned for technological prowess yet deeply steeped in tradition. A people who are cultured, ultra polite and mild mannered but can yet harbour the most bizarre thoughts and perverse acts in private. On the Fugaku, this curios juxtaposition of ultra conservatism and blaring vulgarity is so wild that it almost works. So chalk that up to our inability to rationalise. Mea Culpa. 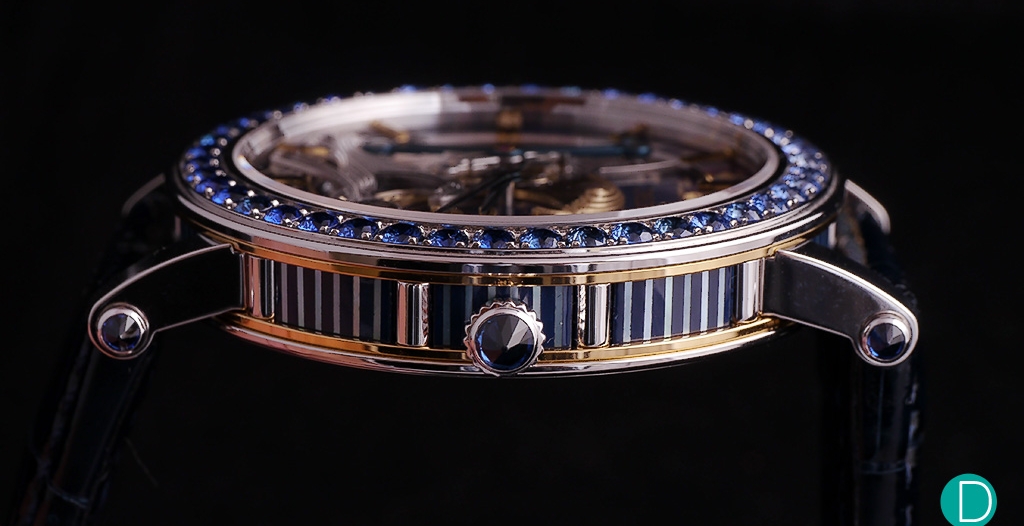 So this is why it took us so long to write this article. And in the end, it is not in the fashion of a formal review that you have come to expect from the Chief Editor’s hand. But rather a look at the incredible watch, and talents it took to create it. And a strange mix of his personal affronts and internal inability to rationalise. He apologises for it.

Yet we applaud Seiko for having the courage to try something bold, unusual, and in new untested territory for them. Bravo!

So for those who enjoy the watch, more power to you! After all, we doubt Seiko will have any fear of being able to sell out the collection, as only 8 examples will ever be made. The high price tag notwithstanding. And they have already created history as the first tourbillon by the company.