Can you be the best even if you are not the most powerful or the most expensive?

Yes, because one of the most tempting propositions within the Mercedes-Benz lineup has always been the AMG version of the C-Class. Originally the entry-level Mercedes, the C-Class is now square in the brand’s midrange. 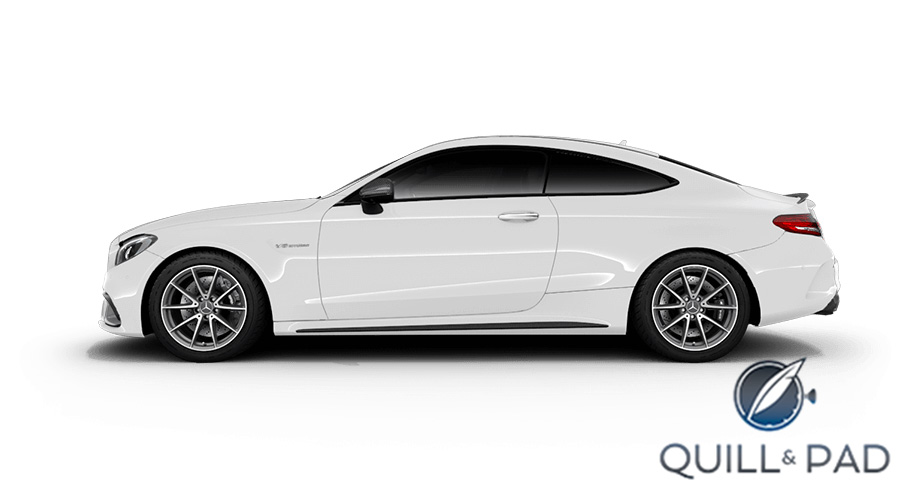 In the previous generation, the sedan was the most imposing car in the lineup – probably because it didn’t look the part. But in the latest generation, the coupé is the one to have. Not only because it corners slightly better than its four-door sibling, but also because it is the better looking relative. It looks like a miniature S-Class coupé, an automobile that has wooed car enthusiasts with its 2016 styling.

While the previous AMG C-Class was best appreciated from certain angles, the new C 63 S Coupé is stunning from every angle. When you tire of conquering that mountain at speeds that would turn Steve McQueen pale and make you just want to sit down at a restaurant, order “ein grosses bier” (a large beer: alcohol-free, of course, because driving a C 63 S Coupé is already irresponsible enough), and admire your car.

Taking one of your most powerful engines and fitting it into one of your smaller cars is a proven recipe, especially when the chef who cooked it up is called Mercedes-Benz.

The result is the AMG C 63 S Coupé, a Teutonic muscle car, one that not only rules the straights of the autobahn, but will make you smile from ear to ear thundering up a mountain road.

An aphrodisiac for an engine

Not for too long, though, because this Mercedes comes with the ultimate aphrodisiac for car connoisseurs: a V8 engine just shy of four liters. Where most premium car brands downsize their engines (even Maserati’s latest SUV currently relies on V6 power) and use “exhaust-composers” (interior sound openings) or simply the speakers of the sound system to boost the engine roar, Mercedes does not need this trickery. 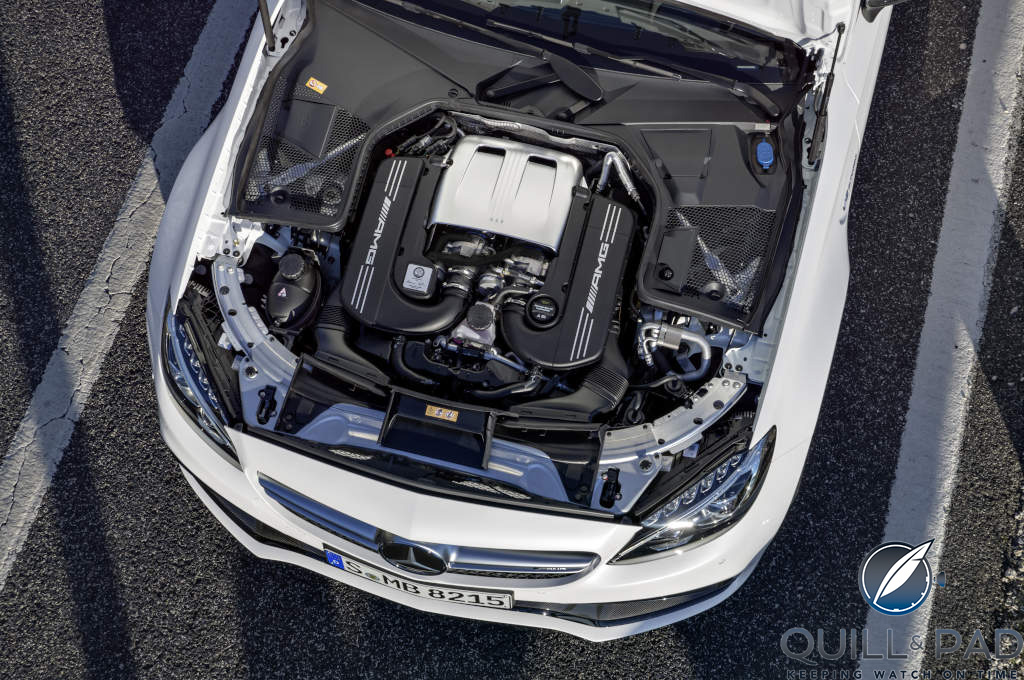 The V8 is as loud as a distant rumbling thunderstorm when you start it, but that storm front rolls in fast as soon as you push the throttle down.

It can, of course, go faster, much faster, but getting there is so much fun. And in most countries this top speed is more than enough to see you lose your license – and probably worse.

Be careful when you do so, because you might black out. Aided by dual turbos, the V8 has an impressive 510 horsepower.

AMG has on occasion gone overboard with styling, but with the C 63 S Coupé is just right. To fit everything in, the brand’s engineers had to increase the track width of the car by six centimeters, which includes making the wheel arcs a bit wider to accommodate the Michelin Pilot Super Sports. While some slightly more aggressive bumpers have been added, there are no crazy spoilers. 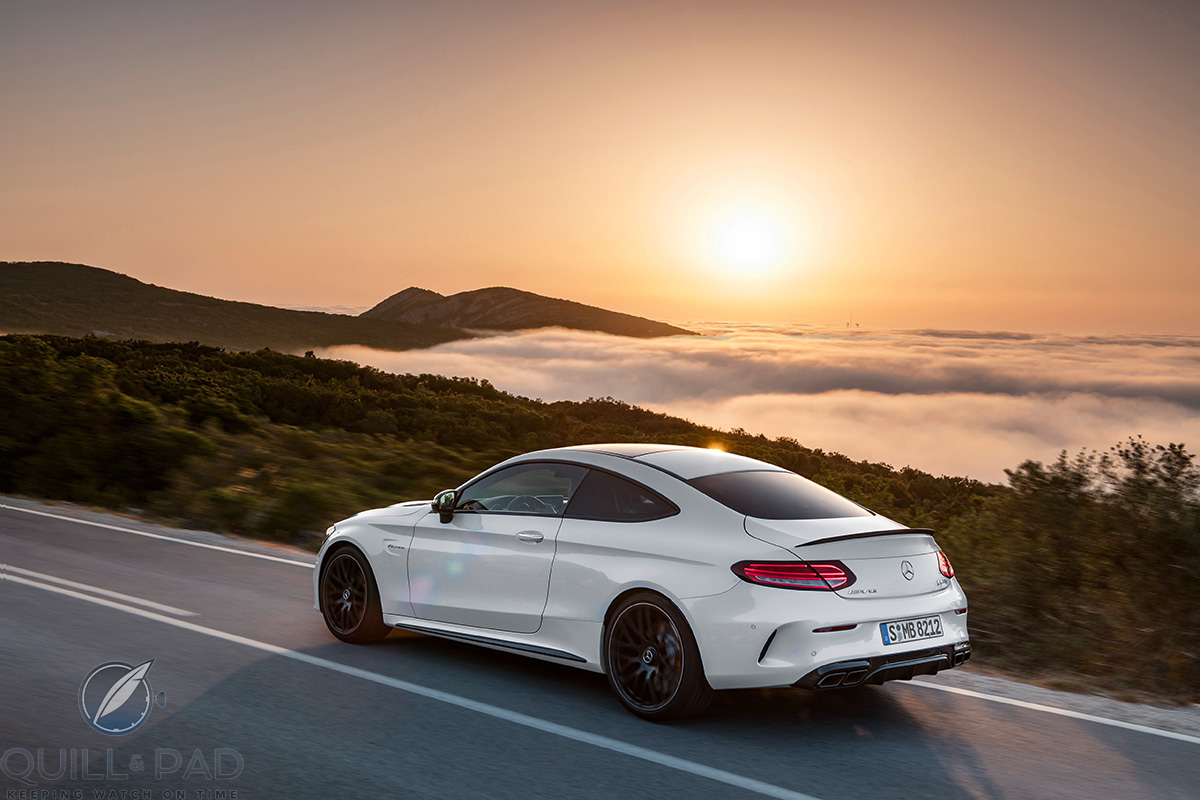 Of course, we can count on some tuning companies to offer this as an aftermarket option for people who had the taste to select the C 63 S Coupé in the first place, but perhaps lacked the confidence to understand that other people might not recognize it for what it is: a brutally perfect sports coupé.

Perfection on the inside

The three air vents in the center of the dashboard are placed in the shadow of what seems to be a randomly placed iPad. As much as you may dislike this display when your car is turned off and its screen is vacuously black, you are sure to appreciate it all the more when it is up and running. It not only functions great, but it’s also very easy to read . . . thanks in great part to its positioning, I regretfully have to admit.

That sense for perfection can also be found inside the cabin. Leather, Alcantara, and carbon fiber are brought together in a functional symphony that is as pleasing to the eye as it is ergonomically sound. Wood is also available to order, but that is perhaps better suited for a non-AMG vehicle. 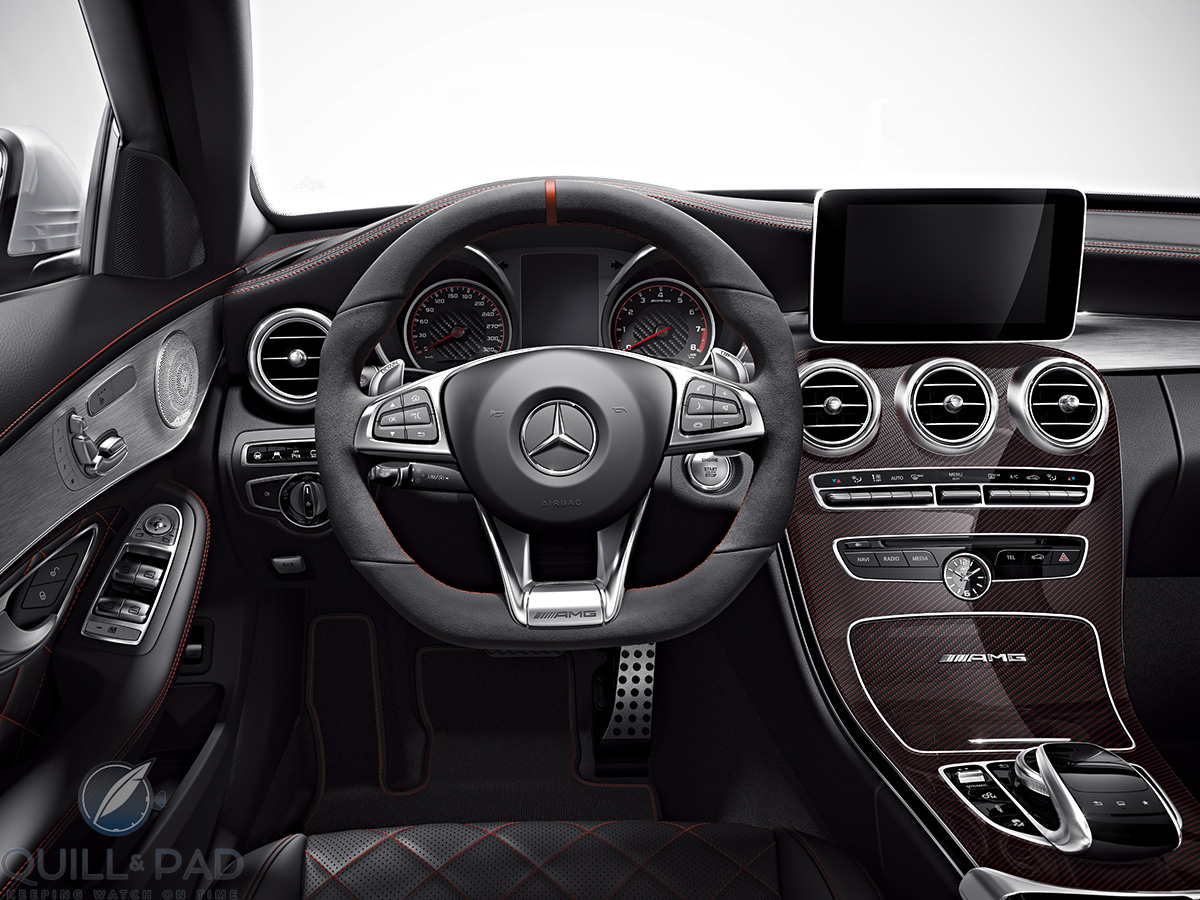 There is also a Mercedes-AMG C 63 version without the S, but that one is lacking the electronically controlled differential and the active engine mounts that stiffen or relax depending on the driving situation. Most drivers perfectly fit with the “regular” C 63, but should you be fighting off M4s and RS5s around you on the autobahn, you definitely don’t want to look back and see if you aren’t about to get eaten by another of your own make and model!

The Mercedes-AMG C 63 S is actually surprisingly well rounded so that both gentleman drivers and race professionals can enjoy it to the fullest – on both streets and the track!

You might even have so much fun with it that you would consider using this Benz for your daily commute: do it! Your neighbors might not be too happy with you when the V8 roars to life every morning, but hey . . . not everyone is so privileged as to be able to wake up to the sound of Mercedes’ best!

The best part of the cabin can be found just above the AMG logo in the center of the car: an IWC dashboard clock. Styled like the dial of an Ingenieur model, it is there to help keep track of the numerous hours of fun you are going to have with this car.

It’s funny but you might almost overlook the clock inside the car. Not that you don’t see it, but that you don’t notice it since it fits in so well with the whole theme of this AMG. That is something I unfortunately cannot say for all car-watch brand collaborations.