After seeing and trying on all the H.Moser & Cie collections last March, I came to the conclusion that I made an evaluation mistake in the past. The mushrooming of independent haute-horlogerie brands in the last few years has been so dramatic that one always runs the risk of either over-estimating or under-estimating a specific brand, and that’s exactly why I had overlooked the small manufacturer from Schaffausen in the past. Back from Basel , I have already reviewed the main novelties by H.Moser & Cie and my favourite piece is the Endeavour Perpetual Calendar Funky Blue (and I think that my choice will stay like that for a while) but if  I take a quick look at all the brand’s various collections, I can clearly state that there are very few timepieces that don’t meet my standards. 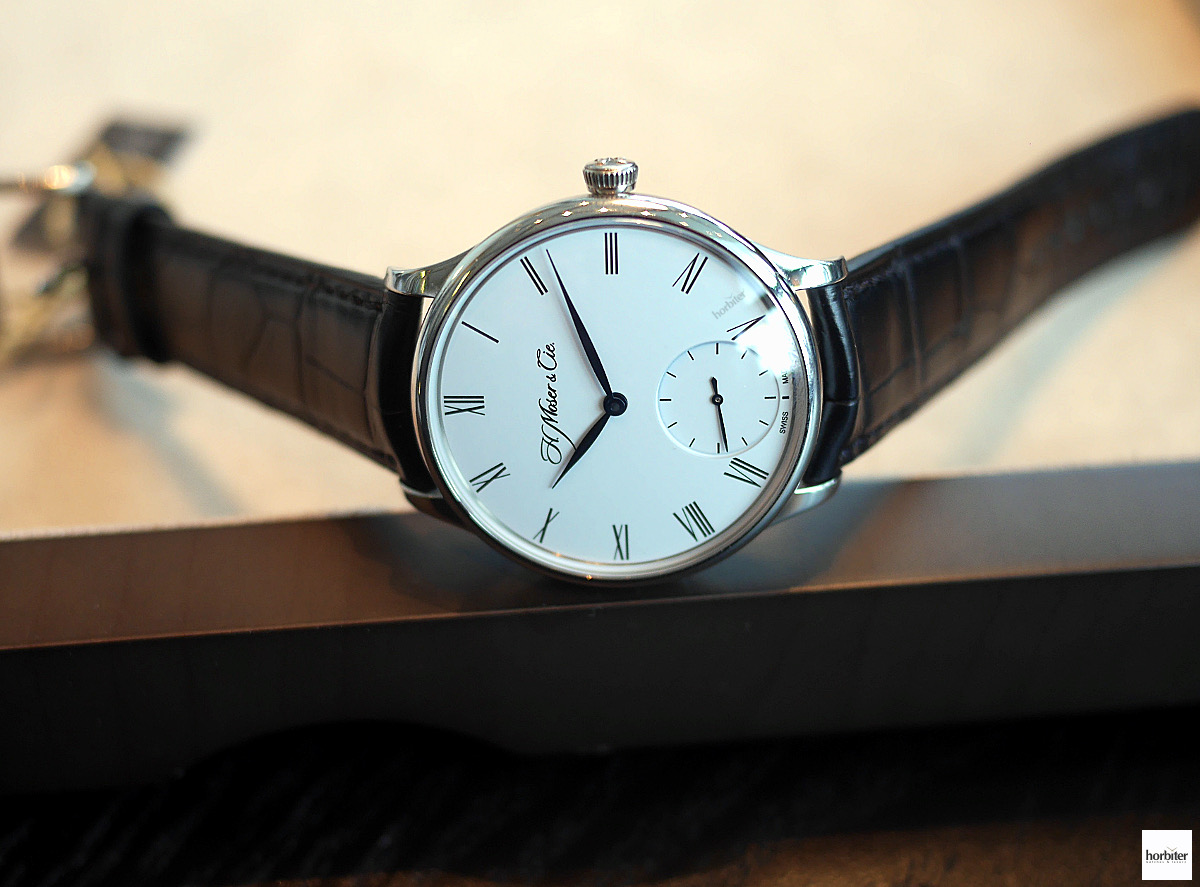 Creating a perpetual calendar with a strong personality is definitely not an easy task but creating a three-hand-watch that is able to get its niche among the multitude of well-known brands (those for which you would spend over 10k euro without the blink of an eye solely based on a printed ad) is a paramount result. Being able to steal even one customer from one of these well-known brand is an outstanding image success and the H.Moser & Cie Venturer Small Seconds White Gold White Dial that I have talked about in the above article is the typical example of a battle won. H.Moser & Cie has eventually found its golden timepiece; the same way a photographer finds the perfect scenario for a picture or a journalist writes the article of his life, which makes him famous. 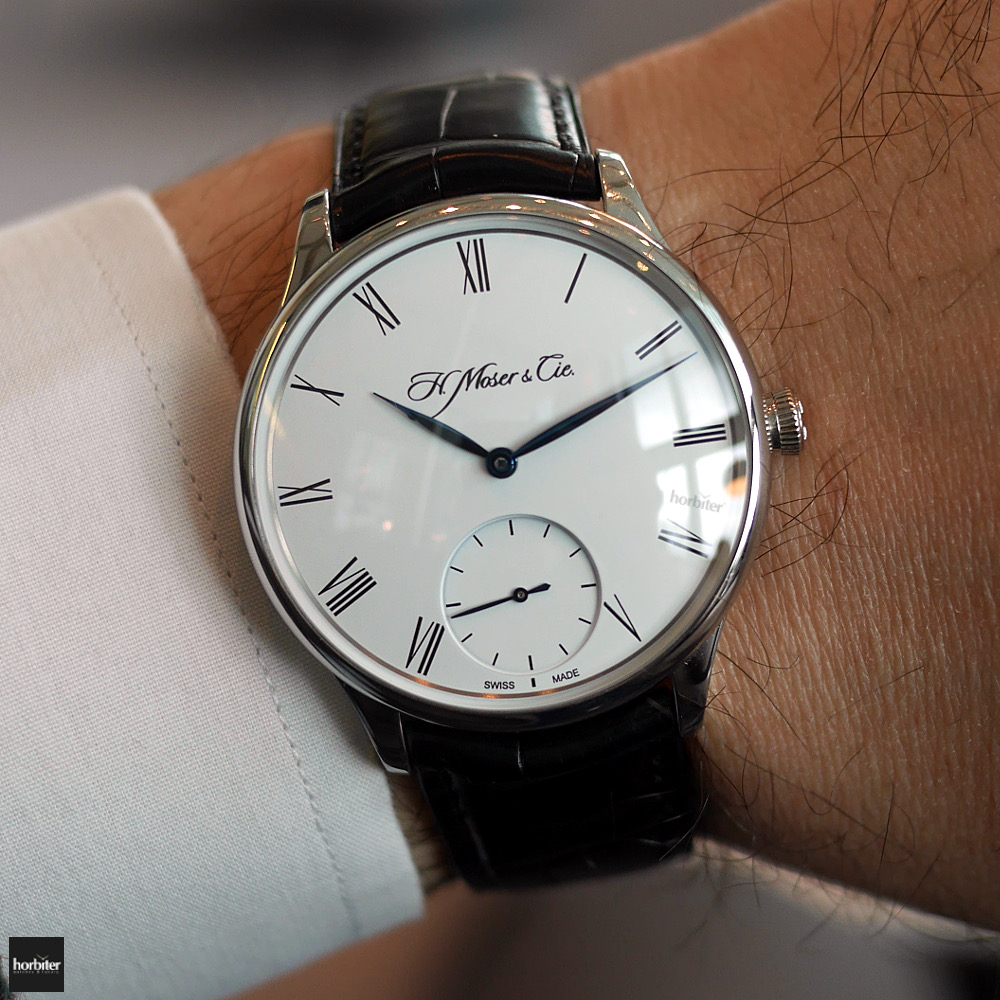 The case measures 39mm ; a standard size for a classic three-hand-watch that sports the three hands in a small dial placed at 6 o’clock. H.Moser & Cie defines its Venturer Small Seconds White Gold White Dial as a “ Neo-Vintage ” watch replica . Are they perhaps implying that this timepiece represents a more modern version of a re-interpretation? I am not sure about that but whatever the source of inspiration or the marketing message might be, the H.Moser & Cie Venturer Small Seconds White Gold White Dial features many details that really make the difference, lacking in its competitors’ timepieces. The dial is simple but not ordinary, think about the choice of enamelling it and pairing it with a convexed glass that creates a sense of tridimensionality. The Roman numbers are elongated, stylized and extremely classic in style: after taking a good look at the pictures that I made a few months ago and after comparing this timepiece with other five watches from the competition, I have come to the conclusion that you can only achieve such a well-proportioned result through an almost obsessive study of the proportions of the different parts of this timepiece, like the Roman numbers, the little dial of the small seconds that is slightly embossed and the shape and length of the the hands (that are actually light blue in colour but, unfortunately, you can’t really see that in my proprietary pictures.) 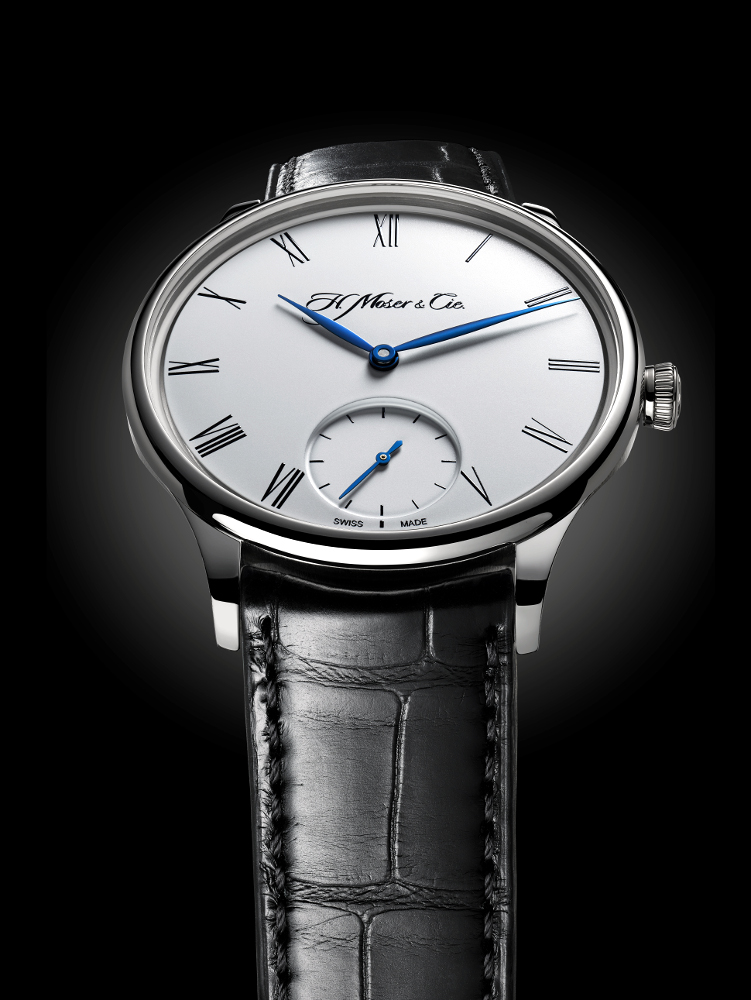 The only thing that the case has in common with other watch replica es replica is its diameter that represents an (almost) untouchable size but it is the case’s complex geometric structure divided into 3 parts that makes the difference and that gives a touch of “ personality ”. The main characteristic of the inhouse-built HMC 327 caliber is not its 3-day-power-reserve (that’s a pretty much common feature) but rather the fact that this is a timepiece with hand winding that boasts a variety of high-precision finishings. 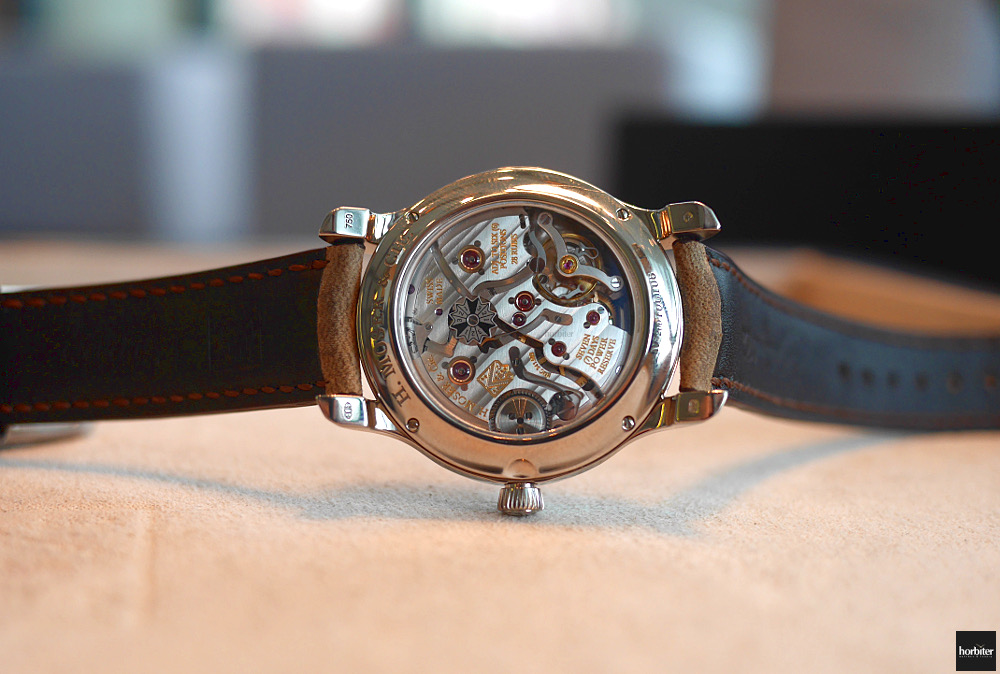 Despite not owning a picture of the back case, let me please point to a similar example (a bit more complex perhaps): the Perpetual Calendar . Here, the accent is not on opulence but rather on the perfection and high quality of the craftsmanship that reminds me of the Austrian or Saxon haute-horlogerie schools. The technique used is for real connoisseurs; the caliber features an Original Straumann Hairspring with stabilised Breguet overcoil and the complications – like the power reserve – are on the side of the movement; a conceptual design choice that couples sobriety and simplicity, while still maintaining a classic manufacturing layout featuring great complications (the minutes repetition is actually missing). Besides, I hope I am not wrong, this is the first H.Moser & Cie watch replica sporting Roman numbers on the dial.

The H.Moser & Cie Venturer Small Seconds White Gold White Dial is the victory of luxury craftsmanship over the “ bottom line ” rule that currently dominates the world of Swiss manufacturing and that has dramatically transformed more than one brand and its clientele by usually making the group that the manufacturer belongs to grow exponentially. I am not aware of the retail price of this timepiece but given the fact that it is only being issued in some 1,000 pieces a year and that the case is made of white gold, I would expect a retail price of about 12,000 – 15,000 euro. This timepiece is most definitely worth this amount of money because it is the perfect watch replica for connoisseurs and for those classy men who drive a Porsche 356 Carrera during the weekend and only want to hand-wind their watch replica every 3 days; those men who are not buying something to simply belong to a small eliterian class, but those men who are rather creating their own new clan. 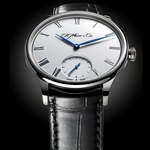 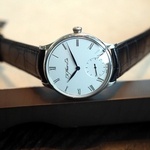 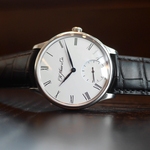 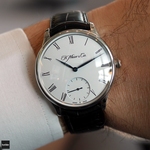 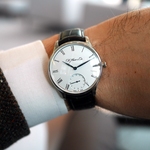 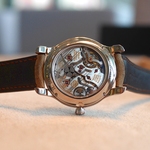