Welcome to the 2016 SIHH ! This is the third year in a row that we have attended this famous haute-horlogerie fair and, for the next four days, we will be taking pictures of all the latest novelties crafted by the Richemont Group and by all the haute-horlogerie brands that have recently moved from the “ off-show ” rooms of the Basel fair to those of the Geneva PalaExpo (worth a mention are, for example, Moser & Cie , MB&F , HYT and many more.) Thanks to these new additions, the fair has gained even more prestige and has become a point of reference for everything that is haute-horlogerie. As I like joking, it will be a “ full-immersion-week ” for me and I will be lucky enough to try first hand all the 2016 new releases by great brands ( IWC , Montblanc , Jaeger-LeCoultre , Audemars Piguet , Vacheron Constantin and many more.) 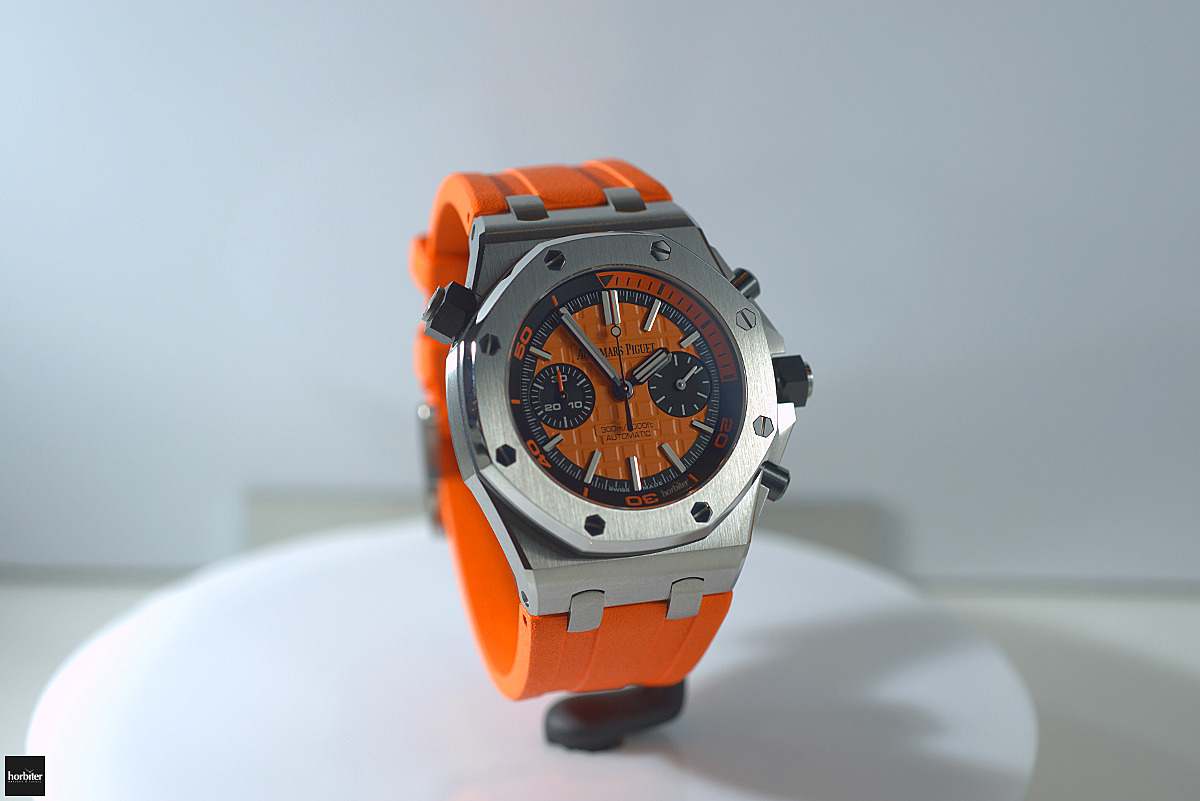 The manufacturer from Le Brassus will have the honour to open the “ new releases show ”; so far I have counted more than 20 new releases and at least half of these are connected to the Royal Oak collection while others are completely new concepts and fine examples of haute-horlogerie pieces that would definitely require a bit more time to be fully appreciated and understood than the short sneak peek that I have been granted. 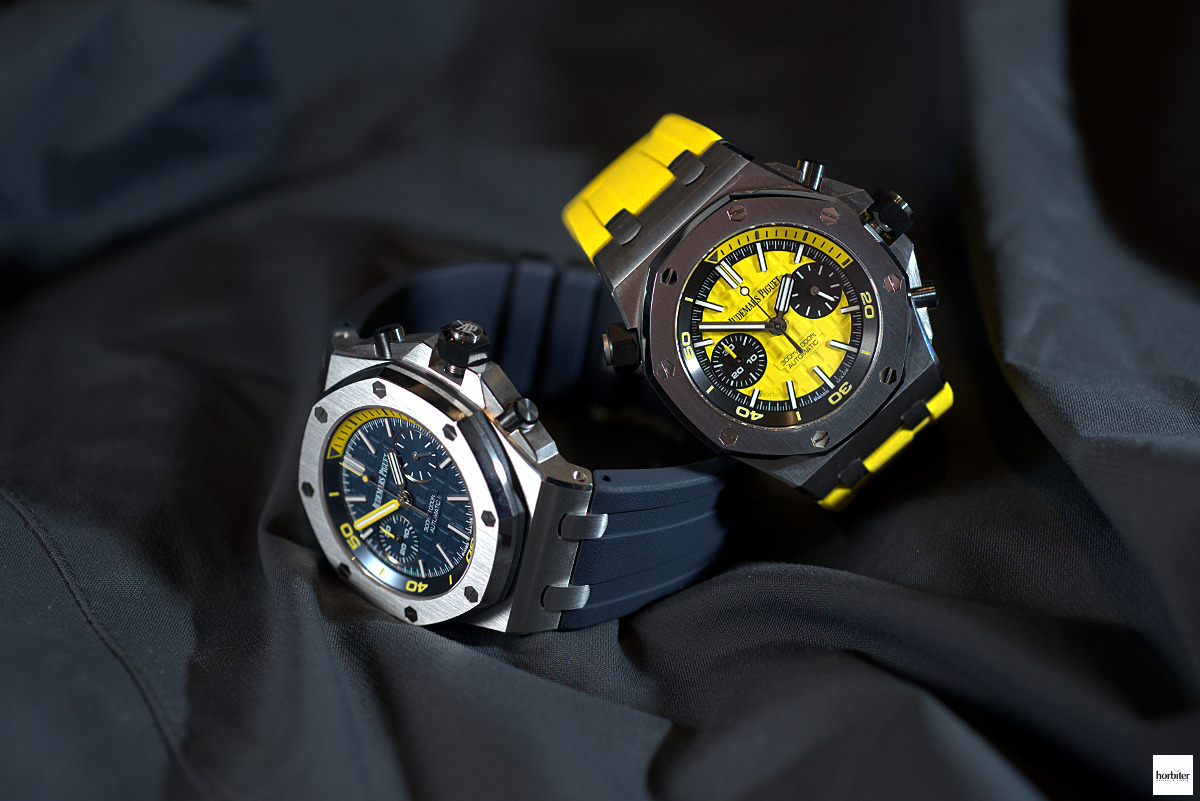 The preview is dedicated to the new version of the Royal Oak Diver that, in 2016, will become a chronograph crafted in different coloured versions, three of which are so unique that they probably represent an even bigger leap than that taken by the brand a few years ago when they launched some limited series based on the Chrono Offshore model (like, for instance, the Montoya and its version dedicated to Shaquille O’Neal or the more recent Offshore Volcano .) The Audemars Piguet Royal Oak Offshore Diver Chronograph is a two-counter-chrono that has been specifically designed and crafted in four different colour variations and that the manufacturer will retail exclusively at their boutique shops across the world. 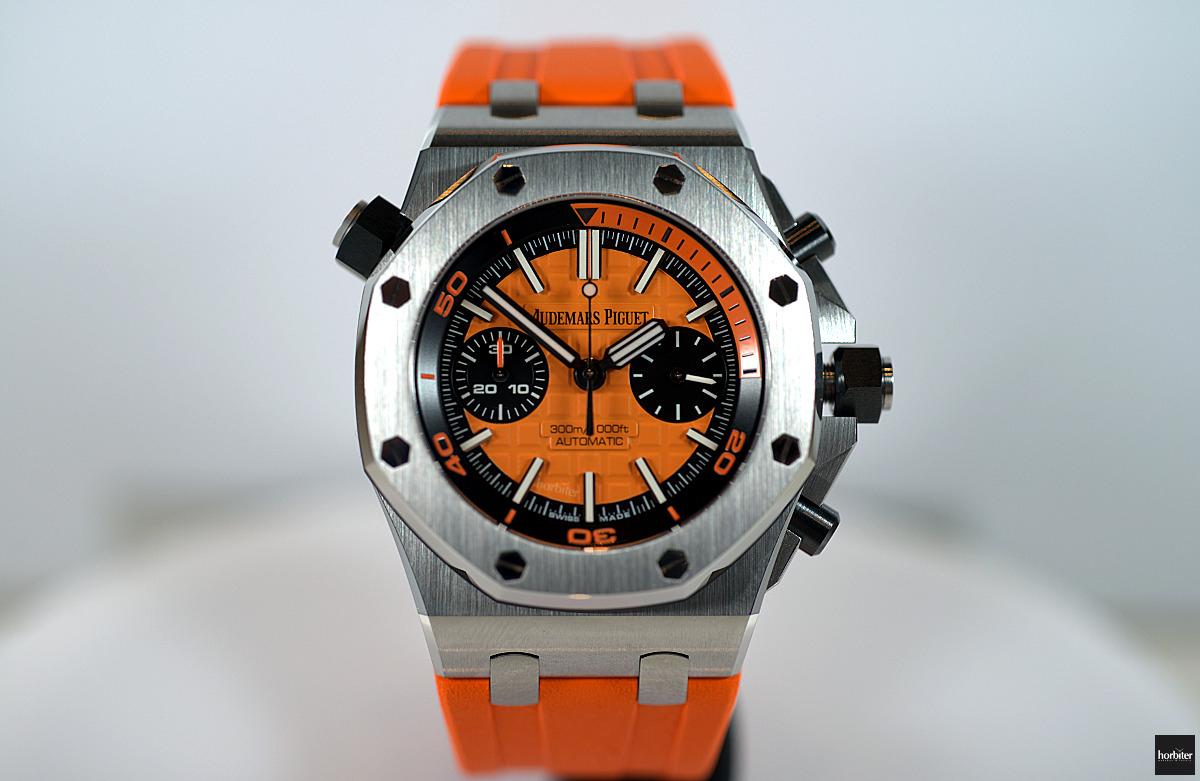 The Mega Tapisserie pattern present on the dial, possibly the least visible example of this type of decoration on a Royal Oak watch replica , has been created in blue , green , orange or yellow colour. The four different hues match the colour of the watch replica ‘s rubber band with its big buckle and with the measuring scale raging from 60 to 15 minutes that has been crafted in the very same colour and then filled with luminescent material. The two counters , on the right hand side is the continuous seconds counter while on the left hand side is the 30-chrono-minute conuter , totally clash with each other in every version of this timepiece, except for the blue-dial-version that happens to be my favourite one at first sight. 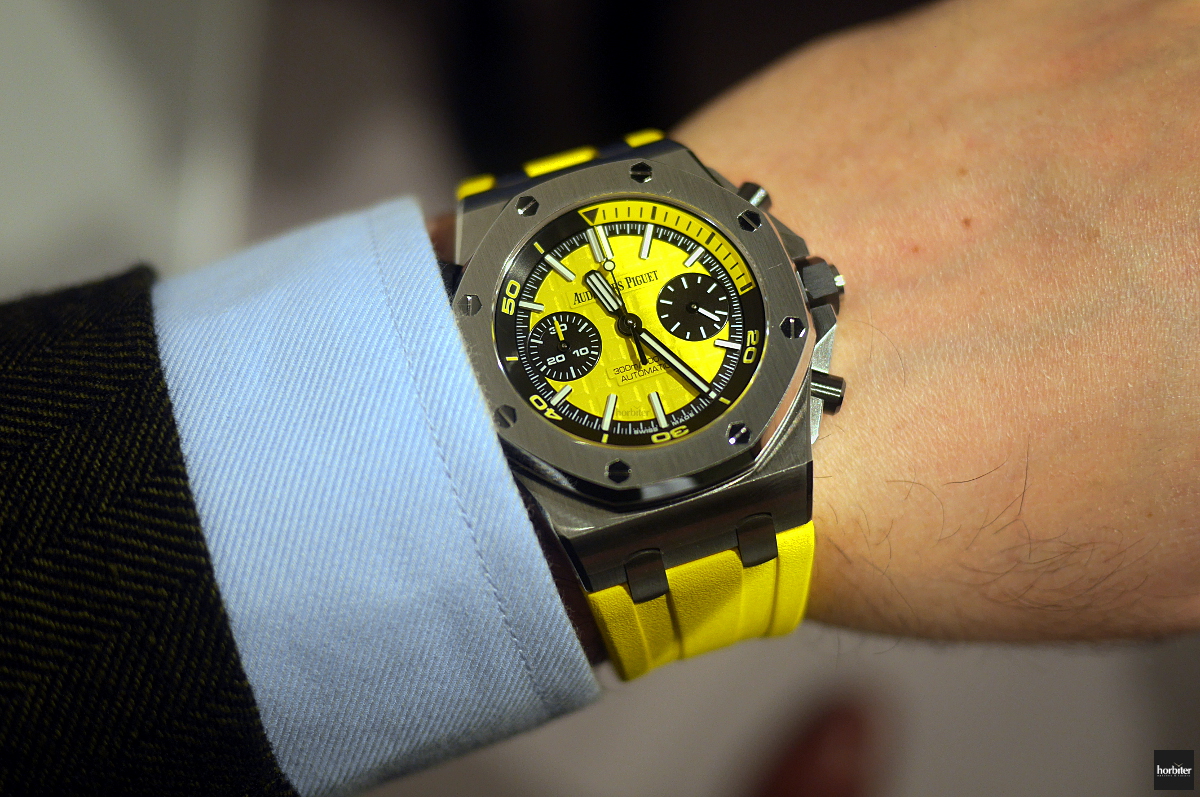 The crown guards have been redesigned to offer even more protection to the ceramic-made chrono buttons and they feature a double profile that, from an aesthetic point of view, makes the Diver Chrono very similar to the last generation Offshore Chrono timepieces. The Audemars Piguet Royal Oak Offshore Diver Chronograph is waterproof-guaranteed up to a depth of 300 metres and is equipped with the in-house built 3124 / 3841 caliber that runs at a frequency of 3Hz and that guarantees up to 50 hours of power reserve . You can view the caliber through the octagonal-shaped back cover – like the bezel – that is attached to the back case through eight screws that are perfectly symmetrical to those mounted on the bezel. This design solution gives us the impression that the screws were actually through screws and the choice to craft a see-through-back case makes the concept of the Audemars Piguet Royal Oak Offshore Diver Chronograph much more similar to a classic Royal Oak Offshore rather than a typical diver’s timepiece, where, by definition, the back-case is usually completely closed. The retail price totals approximate 28k euro.